“I want to thank Commissioner Robertson for his leadership to grow Indiana’s business-friendly environment while also providing efficient and effective oversight of our insurers,” Gov. Holcomb said. “His expertise in the insurance industry has protected Hoosiers during some of the most vulnerable moments of their lives.”

“I have had the privilege and honor of serving under three great Governors. Thank you to all three for allowing me to serve the Indiana public as Commissioner of insurance. I also would like to thank the employees of the Indiana Department of Insurance for their fine service to the state,” said Robertson. “I’ve always known that a time would come when it was appropriate for me to voluntarily leave government service. Now is that time.”

The Department of Insurance protects Hoosiers as they purchase and use insurance products to keep their assets and their families from loss or harm. The agency also monitors the financial solvency of Indiana insurance companies. Under Robertson’s guidance, the number of insured Hoosiers has increased by nearly six percentage points from 2013 to 2019. He worked with insurance companies to ensure all Indiana counties had at least one insurance company offering individual ACA-compliant plans.

Robertson also has been very active in the National Association of Insurance Commissioners (NAIC). He has served in various leadership capacities during his tenure as commissioner.

Robertson’s insurance career began with the Nebraska Department of Insurance in 1977 where he served as general counsel. Prior to joining the Indiana Department of Insurance, he worked nearly a decade with Conseco Insurance Group where he was a senior vice president. He also served in the U.S. Army as a sergeant in the military police. Robertson earned an undergraduate degree and a law degree from the University of Nebraska. 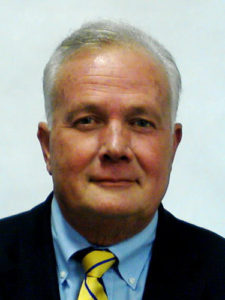