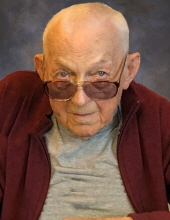 He was born in Prairie City, Clay County, IN on July 19, 1925, the youngest child of Conrad Redenbarger and Anna Mae (Stunkard) Redenbarger. Paul graduated from Brazil High School in 1943.

He had been a resident of Towne Park Assisted Living for the last three years and a life-long resident of Brazil. When health permitted, he attended First Presbyterian Church in Brazil and always kept a strong Christian faith.

Paul graduated from Brazil High School in 1943 and was immediately inducted into the Army. He was trained in the Cavalry and learned to handle horses. He departed from California to the Pacific War Theatre where he experienced active conflict in the Leyte Gulf of the Philippines. A few years after returning from World War II, he re-enlisted in the Air Force. Then in 1950 the Korean conflict erupted and he was sent to Korea, where he received minor injuries from an enemy grenade. After Korea Paul joined the Air National Guard and was deployed to France. As a result of Paul’s many years of service he was awarded three Battle Stars, Good Conduct Medal, Combat Medal and Liberation Medal.

After Paul’s military duty ended he returned to Brazil and was employed by Indiana State University as a maintenance purchasing clerk. He remained there until his retirement in 1989. In 2015, Paul was honored to be chosen for an Indy Honor Flight to Washington, D.C., accompanied by his dear friend and traveling guardian Rodney Clarke.

His love of animals was evident by his devotion to his three beloved dachshund dogs: “Snuffy I, II, and III”. Paul’s generous nature and true appreciation for his friends and care givers will be remembered by many.

Paul was preceded in death by his parents; his brothers; Warren Robert Redenbarger and Walter Conrad Redenbarger; and his sister Gladys Irene (Redenbarger) Haney.

He is survived by his nieces; Jo Anna Thompson of Portland, Oregon; and Linda Geloff (Jim) of Indianapolis, Indiana; great nieces, Polly and Jenny; and great nephew, Tony.

In accordance with Paul’s wishes no funeral services will be held and cremation will be chosen. Memorial contributions in Paul’s memory may be made to the Clay County Humane Society, 8280 N County Road 125 W, Brazil, IN, 47834.