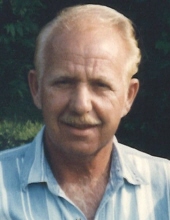 He was born in Patricksburg, Indiana on July 26, 1942 the son of Harry and Leatha (Leohr) Frye. He was a graduate of Patricksburg High School and graduated in 1961.

Vic worked at Frye and Son’s DX Garage in Patricksburg. He served in the United States Army from 1963 to 1965. Vic retried from the Clay County Rural Telephone Company where he was a Cable Splicer for 42 years.

He was one of the founders of the Bowling Green Volunteer Fire Department. He was the Crew Chief of the Blue Thunder Pulling Truck. He enjoyed gardening, truck pulling, Indy 500 and working on small engines and doing electrical wiring for family and friends.

Vic is survived by the mother of his children: Jane Frye of Brazil; sons: Tadd Frye of Bowling Green, Travis Frye and wife Christy of Brazil, and Trent Frye of Cory; brothers: Harlan Frye of Terre Haute, Randy Frye and wife Leah of Patricksburg; several nieces and nephews; a special friend Teri and his buddy Australian Shepherd Bruiser.

Visitation will be at Lawson – Miller Chapel, on Thursday, February 25, 2021, from 11am until 1:00pm. Services will follow at 1:00pm with burial following at Hudson Hill Cemetery.
In lieu of flowers donations may be made to Wabash Valley Racers for Kids.
Visit www.lawson-millerchapel.com to light a candle in his memory.