Clay County – Thursday, February 4, at approximately 5:25 p.m., officers from the Putnamville State Police Post responded to a two-vehicle accident on Interstate 70 westbound near the twenty-six-mile marker.

The preliminary crash investigation by Trooper Athan Lamson, of the Putnamville Post, revealed that Curtis Ray, age 35, of Colorado Springs, Colorado, was driving a 2017 Chevrolet, west on Interstate 70 near the twenty-six-mile marker.  Due to the rain and wet road conditions, traffic was slowed, and drivers were using their hazard lights.  Ray failed to observe the hazard lights of the slowed traffic and attempted an evasive driving maneuver to avoid a collision, switching lanes rapidly. Because of this, Ray’s vehicle collided with the rear of a 2020 International semi-tractor trailer driven by Tommy L. Rosecrans, age 32, of Oskaloosa, Kansas. This collision caused Ray’s vehicle to flip and come to an abrupt stop facing eastbound in the westbound lanes.  Good samaritans at the scene rendered lifesaving first aid to Ray until the arrival of first responders.

Upon the arrival of first responders, Ray was immediately transported by Starr Ambulance from the crash scene, to Regional Hospital, for immediate medical care. 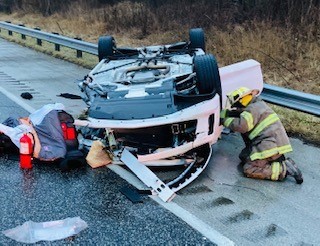