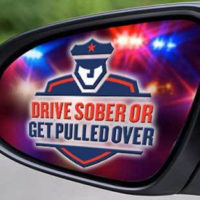 STATEWIDE–In 2018, there were just under 4,000 alcohol-impaired crashes in Indiana that resulted in 83 deaths. That’s just one of many reasons more than 200 state and local law enforcement agencies have joined the “Drive Sober or Get Pulled Over” campaign.

Of those crashes, 48 of them and 1 death happened during the Labor Day Holiday weekend. The campaign is going on now through Labor Day again this year. The patrols for it are supported by money from the National Highway Traffic Safety Administration, which are distributed by the Indiana Criminal Justice Institute.

“People are having more parties as summer is winding down. We just typically see an increase of DUI arrests over this time period,” says Sergeant Matt Ames, Public Information Officer for the Putnamville District.

Ames says one person is killed every 50 minutes by a drunk driver in the U.S. It’s something Ames calls “totally preventable.”

“Unfortunately, the tragedies of someone choosing to drive drunk touches every county in the state of Indiana at some point or another,” says State Police Sergeant John Perrine, Public Information Officer for Central Indiana. “If we catch someone driving impaired, they will go to jail.”

Perrine says there are several strategies they will implement during the campaign to catch people who are driving impaired.

In Indiana, it is illegal to drive with a blood-alcohol concentration (BAC) of .08 or higher. Drivers under the age of 21 with a BAC of .02 or higher are subject to fines and having their license suspended for up to a year.

Ames says police will catch drivers, but they could also use your help.

“If you happen to see an impaired driver, make sure that you call 911 and give the dispatcher an accurate description of the vehicle and a possible license plate number,” says Ames.

Both Perrine and Ames say planning a safe and sober ride home is something you should do if you plan on drinking. They recommend using a ride-sharing service (like Uber or Lyft), public transportation, or a taxi to get home safely.