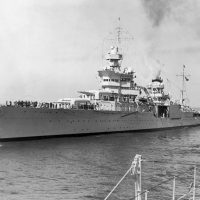 WASHINGTON D.C. — It’s been 75 years since the USS Indianapolis was torpedoed and sunk by a Japanese submarine. The men who were onboard the Navy ship were given the Congressional Gold Medal in a virtual ceremony Thursday morning. The ceremony was done virtually because of the coronavirus. The Congressional Gold Medal is one of the highest civilian awards in the United States. Of 1,195 crewmen aboard, approximately 300 went down with the ship. The remaining 890 faced exposure, dehydration, saltwater poisoning, and shark attacks while stranded in the open ocean with few lifeboats and almost no food or water. The Navy only learned of the sinking four days later, when survivors were spotted by the crew of a PV-1 Ventura on routine patrol. Only 316 survived. Eight survivors remain alive today.