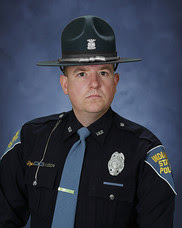 Indianapolis, IN –Indiana State Police Superintendent Doug Carter recently announced to promotion of Trooper Thomas Burgett to the position of Sergeant, to serve as the Commercial Vehicle Division Compliance Review Squad Leader. Burgett was chosen after competing in a promotion process that included a written examination, an oral interview and an overall evaluation of his work performance.

Sgt. Burgett is a native of Johnson County and grew up in Trafalgar where he attended Indian Creek High School, graduating from McDowell in 1999. After high school Burgett enlisted in the United States Navy where he served as a Flight Engineer from 2001 to 2006. While in the U.S. Navy Burgett attended and graduated from Embry-Riddle Aeronautical University. He was hired by the Indiana State Police in 2007 and was first assigned to road patrol in the Indianapolis District. In addition to his regular duties as a Trooper, Burgett became certified in Commercial Vehicle Enforcement and later transferred to the Commercial Vehicle Division full time. While working in CVED Thomas became a Compliance Review Investigator until being promoted into his current position.

Sgt. Burgett’s new duties include technical assistance and review of the Motor Carrier Safety Assistance Program with an emphasis on Compliance Review. He will train, supervise and evaluate other Compliance Review Officers. He will identify problem motor carriers for follow-up audits and ensure Commercial Motor Carriers are compliant with safety regulations.

Commercial Vehicle Enforcement Division Commander, Major Jon Smithers, said, “Thomas has proven his abilities through his work ethic, dependability, organization skills and determination. We are fortunate to have him in our division, he is an asset to our program and without a doubt his efforts will make our roadways safer for everyone.”

Sgt. Burgett currently resides in Johnson County with his wife Belinda and their two children.