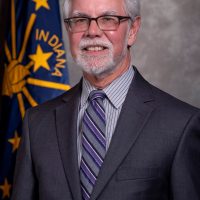 “My colleagues across the aisle have once again released an uninspiring list of priorities that come nowhere close to meeting the demands of Hoosiers. They have further doubled down on their promise not to address inadequate teacher pay. They have neglected the burning issue of gerrymandering in the final year that the redistricting process can be altered. They have ignored the voices of thousands of Hoosiers who demand gun safety and marijuana decriminalization.

“Prioritizing the transparency of health care costs without also fighting to lower those costs does little to help sick Hoosiers who are fighting bankruptcy due to unaffordable medicine, whether they know the costs up front or not.

“Holding K-12 schools harmless from ILEARN results without also restructuring the entire accountability system so this does not happen once again in another four years does nothing to restore integrity to our school evaluation process.

“Addressing government debt pre-approved in the state budget by cash funding projects with unexpected revenue does nothing for long-term success for our state’s economy. Nonetheless, Indiana’s taxpayers bear the burden of an overwhelming surplus in which they reap none of the rewards.

“Raising the smoking and vaping age in Indiana to 21 is a rather pointless priority when the federal government raised the age nationally less than a month ago. Additionally, the same argument used by my colleagues to justify state action to raise the age is the exact opposite reason they will not legalize marijuana in our state. With marijuana, they cower at the feet of the federal government, even when Hoosiers demand reform.

“While I am disappointed yet again that the Senate Republicans failed to put Hoosiers first in their priorities, I will continue to push forward on my own caucus’ priorities to end gerrymandering, stop preventable gun deaths and decriminalize marijuana.”

Sen. Lanane represents Indiana Senate District 25 which includes portions of Madison and Delaware counties, including the City of Muncie and the southeastern portion of the City of Anderson. For more information on Sen. Lanane, his legislative agenda or other State Senate business call 1-800-382-9467 or visit www.IN.gov/S25.