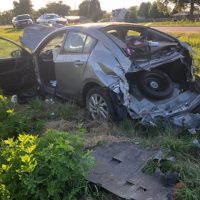 August 10, 2019, at approximately 6:15 p.m., the Putnam County Sheriff’s Department received multiple 911 calls about a silver Mazda passenger car, traveling eastbound on US 40 near County Road 625 West, that was all over the roadway. Putnam County Deputy Anthony Brown attempted to stop the silver Mazda on US 40, just east of the US 231 junction, but the vehicle refused to stop and accelerated away from the deputy.

Indiana State Trooper Colton Maynor was near US 40 at County Road 850 East, and was able to successfully deploy stop sticks. The Mazda ran over the stop sticks, which were successful in deflating two tires, yet continued traveling eastbound on US 40, slowing to 20-30 mph for a few miles. After traveling through Stilesville, the vehicle began to accelerate again, traveling at speeds in excess of 100 mph with two flat tires. Upon entering Hendricks County, the vehicle drifted off the roadway traveling to the south side of US 40, then swerving back to the north and into the median. Upon entering the median, the driver overcorrected and drove back across both eastbound lanes of US 40, running off the south side of the roadway. This caused the vehicle to roll two to three times, eventually striking a power pole and coming to a rest.

Trooper Maynor and Trooper Kyle Hall then retrieved the female out of the vehicle and placed her into custody. The driver was then identified as Karen D. Ponder, age 53, of Indianapolis, Indiana. Emergency Medical Services arrived on the scene and Ponder refused any medical attention. Ponder was then transported to the Putnam County Hospital for medical clearance. Upon receiving medical clearance, Ponder was transported to the Putnam County Jail and was jailed without incident. Ponder did submit to a certified chemical test. Those results, from the Indiana Department of Toxicology, are pending.