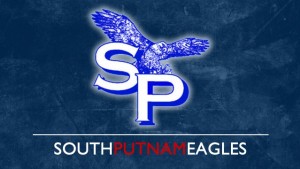 Team Score:  Match was called with 7 holes completed by the teams.
South Putnam  176,  GHS  180
Individual Scores:  GHS:  Molly Ramey 38, Kadence Shaner 45, Allison Scott 47, Jennifer Scott 50,  Rain Minartz 56.   South Putnam:  Alex Steffy 41, Drew Steffy 45, Leyla Hazlett 45, Kate McCammack 45, Maddie Newby 56.
Tiger Cub coach, Stephen Paquin Comments:  Rain interrupted the match before the conclusion of all nine holes played by all the players.  It was a very close match between the two schools before the stoppage; the Eagles coming out on top by 4 shots.  Molly had a very solid seven holes shooting a match low of 38, she was followed by Kadence with a 45, Allison with a 47, Jenn with a 50, and Rain with a 56.  Our players continue to improve in ball striking, but still struggle on the chipping and putting.  Once that improves the scores will become lower and more consistent.  Allison Scott was pretty good in all phases of the game, but struggled with putting, her score would have been at least 6-8 shots better.  She has really improved for a first year player.   It’s still very early in the season and things are looking better for this young and inexperienced team. South Putnam was very consistent and had four good scores that counted.  This was the first time playing Oak Ridge GC for all the Cubs.
Next Match: N. Putnam and Lebanon at Tiger Pointe on Monday at 4:45 pm.
Tags: Girls' Golf, greencastle, South Putnam, WREB, WREB Sports