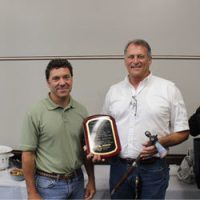 Mark Reiter, director of DNR’s Division of Fish & Wildlife, has retired after 39 years of service.

Reiter started as a biologist aide in 1977. He quickly rose through the ranks as a laborer, property manager, staff specialist, and eventually wildlife chief. After leaving the division for three years to work for the National Rifle Association, he returned as a wildlife staff specialist and public lands program manager before becoming director of Fish & Wildlife in 2009.

Reiter had several notable achievements during his DNR tenure. While director, Reiter was instrumental in the creation of the Healthy Rivers INitiative, modernizing shooting ranges at Fish & Wildlife Areas, establishing the Gamebird Area Program, and creating the deer bundle license.

In June 2019, Reiter received the Sagamore of the Forest, Fields, and Streams lifetime achievement award from the Midwest Association of Fish and Wildlife Agencies (MAFWA). This award is given to directors who have dedicated years of service to the association. Reiter’s 10 years of service to MAFWA included serving on the executive and Recruitment, Retention, and Reactivation (R3) committees.

His passion for competitive and recreational shooting, hunting, and fishing translated well into his work, having worked closely for years with hunter, angler, and shooter recruitment initiatives inside and outside the division. His leadership helped both Indiana and the Midwest region lead in not only R3 initiatives, but also landscape scale conservation, urban conservation, wildlife health, and public access.

During retirement, Reiter plans to focus on time with his family and wants to build a house on property he owns in Owen County.