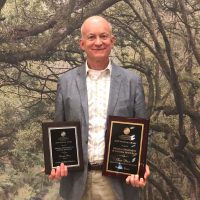 Outdoor Indiana, the bi-monthly magazine of the Indiana DNR, placed second in the nation among State-run conservation magazines at the Association for Conservation Information (ACI) conference this month.

Werner earned first place in the “Magazine Destination, Historical or Cultural Article” category for his article “Retracing the Buffalo Trace,” which ran in the July/August issue. Hiatt did the design. Maxwell and Oliver did the photography, and Benson did the editing.