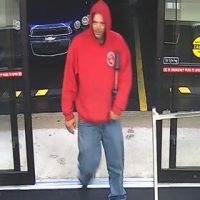 The suspect arrived as a passenger in a newer model, blue, Chevrolet passenger car, and was wearing a red hooded sweat shirt, with what appears to be “Triple T Farms” written on the back, with a horse logo in a center circle.

The male is described as a white male, slim build, in his early to mid-thirties, approximately six feet tall, 185lbs, with a shaved head, and stubble facial hair. He appeared to be with a male and female in the suspect vehicle.

This suspect and suspect vehicle match the same description of the suspect from a similar theft from the Bainbridge, Indiana Laundromat on 4/29/2019.

We are asking for any information regarding the suspect. If you know who he is, you’re asked to contact our 24 hour 100% anonymous crime-tip line at (317) 745-3001, or by contacting Crime Stoppers of Central Indiana.

REMINDER! ALL suspects are innocent until proven guilty in a court of law.