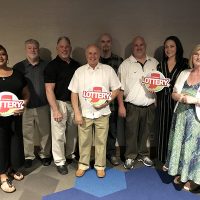 Eight Hoosier Lottery players traveled to Las Vegas last week to participate in the BILLION DOLLAR CHALLENGE™. The Hoosiers, along with 91 other participants from lotteries across the country, were playing for the chance to win up to $1 billion. Laura Clayton from Fishers won big, coming home with a $50,000 prize.

“It’s a bit surreal at the moment. I came here with the mindset that we had a vacation that we didn’t pay for,” Clayton said after the event in Las Vegas.

Clayton advanced to the second round of the BILLION DOLLAR CHALLENGE™ to win the $50,000 prize. She plans to use the prize money to pay off student loans.
She traveled to Las Vegas with her husband, and the couple said they enjoyed relaxing by the pool.

“This is unbelievable,” Clayton said after advancing to the second round. “We were just excited for the free trip.”

The trip took place April 14-17, 2019. In addition to the cash prizes won at the event, each participant received round-trip airfare to Las Vegas, deluxe hotel accommodations for three nights, $1,000 spending money and the opportunity to play in the BILLION DOLLAR CHALLENGE™.

$10 GOLDEN TICKET Estimated Overall Odds are 1 in 3.63. 2nd Chance promotion odds are dependent upon the number of entries received.