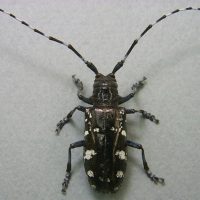 Consider the proclamation as an important reminder for Hoosiers to watch for potentially devastating pests.

Abraham says several more invasive species are close enough to Indiana’s borders to concern Hoosiers. One is Asian long-horned beetle (ALB), which has been found as close as Cincinnati.

ALB attacks hardwood tree species. It has the potential to cause significant economic and environmental impacts if allowed to establish and spread throughout the United States. ALB has been confirmed in Bethel, Ohio, near Cincinnati. Signs of ALB start to show about three to four years after infestation. Tree death occurs in 10 to 15 years.

Adult beetles are 1 to 1.5 inches in length with long antennae. Their bodies are black with small white spots, and their antennae are banded in black and white. A photo and more information are atdnr.IN.gov/entomolo/4527.htm.

Adults can be seen from April to December. Trees with round exit holes, approximately 3/8 of an inch in diameter, are signs of ALB presence. Sawdust-like material can be found at the trunk and branch bases of infested trees. Signs of ALB start to show about three to four years after infestation.

“It’s the species that we have not spotted in Indiana that we need help from the public to keep an eye out for,” Abraham said. “Watch local forests and natural resources for signs and symptoms of trees or vegetation dying off for seemingly no reason.”

The State Entomologist said the DNR would rather answer a call, inspect an area and find nothing to worry about than find out after the fact that someone had spotted a problem and failed to report it.

If you see an ALB or signs of it, call the DNR at (866) NO EXOTIC (866-663-9684) with the date and location. If you can capture the beetle, put in a plastic jar and put it in a freezer to kill it. Members of the public may report invasive species to the DNR through the Report IN website eddmaps.org/indiana/  or by downloading the Great Lakes Early Detection Network (GLEDN) app on a smartphone.

For more information on all invasive species that could affect Indiana and ways to help stop their spread, seednr.IN.gov//3123.htm.