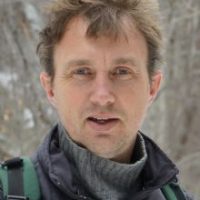 “We Are All Riders on the Same Planet” is the headline of the essay co-authored by DePauw University professor Joseph Heithaus.  The writing is a collaboration with writer and filmaker Matthew Myer Boulton, and was published in the Christmas edition of the New York Times.

In 2007, Heithaus won the Discovery/The Nation Prize for a group of sonnets about poison plants which are a key part of 2012 book “Poison Sonnets”.  Joseph has poems integrated into the stained-glass window murals displayed in the Indianapolis International Airport, as well as featured in the books “Rivers, Rails and Runaways” and “Airmail”.  Heithaus also has poems presented in the North American Review, the African-American Review and other publications.

Joseph Heithaus also had essays published November of 2017 and February of 2018 following the Hurricane Nate and Stoneman Douglas High School shooting in Parkland, Florida.  He is also one of four writers from Depauw featured in “Not Like the Rest of Us: An Anthology of Contemporary Indiana Authors.”