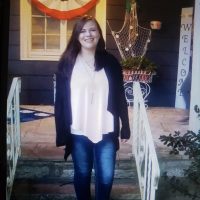 During the overnight hours of October 29, 2018, officers were dispatched to the 100 block of East Logan Street in Brazil regarding a missing/runaway child. The child’s name is Karrigian S. Saums who is a sixteen-year-old white female with brown eyes and brownish blonde hair; she stands approximately 5’ 1” tall and weighs roughly 180 pounds. Karrigian was last seen at the Walmart in Brazil on the evening of October 29th and is now believed to be in the Indianapolis metropolitan area. At this time, Karrigian is believed to be accompanied by a white or hispanic male of the same approximate age who goes by the name “Alex.”

The Brazil Police Department is asking for the public’s assistance in finding Karrigian and bringing her home safely. Anyone with information pertaining to Karrigian’s whereabouts is asked to call the Clay County Dispatch Center at (812)446-2535 Ext. 5.