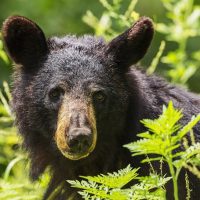 A black bear was hit by a motor vehicle on Interstate 64 near mile marker 121 in the New Albany area at 8 p.m. last night.

The injured bear wandered into heavy brush after the accident. DNR wildlife biologists confirmed that the animal was a bear this afternoon, based in information gathered by Indiana Conservation Officers.

“It’s unfortunate and unusual for a bear to be hit on an Indiana roadway,” said Brad Westrich, DNR mammalogist, “but bear sightings are nothing to be alarmed about. As bear populations expand in neighboring states, it’s only natural that they become more common here.”

If you see a black bear:

— Enjoy it from a distance.
— Never attempt to feed or attract bears.
— Do not climb a tree.
— Advertise your presence by shouting and waving your arms and backing slowly away.
— Report bear sightings to the Indiana Division of Fish & Wildlife at 812-334-1137, through email at dfw@dnr.IN.gov, or wildlife.IN.gov/8497.htm.

Most problems arise when bears associate food sources with humans. Do not feed bears. Doing so increases the likelihood of negative bear-human interactions. Unfortunately, a fed bear often becomes a dead bear due to increased aggressive behaviors associated with the loss of fear of humans—help keep wildlife wild.
Bears can smell food from more than a mile away, so it’s important to secure food sources and discourage animals from associating humans and human dwellings with food. To reduce or eliminate the potential for bear-human conflicts, here are some tips:

— DO remove bird feeders and bird food from late March through November.
— DO clean and store grills away after use.
— DO eliminate food attractants by placing garbage cans inside a garage or shed.
— DO pick ripe fruits and vegetable ASAP, or place an electric fence around them, to ensure bear cannot reach them.
— DON’T intentionally feed bears. Bears that become accustomed to finding food near your home may become “problem” bears.
— DON’T leave pet food outside overnight.
— DON’T add meat or sweets to a compost pile.
— DON’T climb a tree, but wait in a vehicle or building for the bear to leave the area.

More information on black bears is at wildlife.IN.gov/8500.htm.