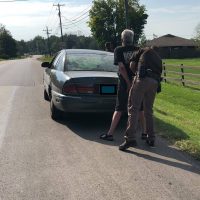 Putnam County Deputies arrested a driver Wednesday morning, Sept 19,  on suspicion of operating while intoxicated. The driver had come into the Sheriff’s dept. requesting to speak with a Detective (none were available at the time). The front office employees quickly noticed that the driver appeared very intoxicated. The suspect left the Sheriff’s dept. and headed south on US231. Deputies caught up with the suspect and stopped him just south of the Hospital. The suspect driver was given field sobriety tests and then a chemical test at the jail. The suspect tested nearly 3 times the legal limit.