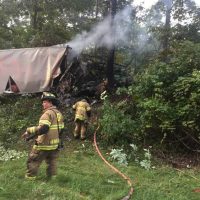 Near Cloverdale on westbound I-70 Friday morning, a tractor-trailer driver died after veering off the interstate and crashing into trees. It is unclear why this accident occurred.

When the truck hit the trees, the truck caught fire and was burnt entirely.

The crash shut down both directions of I-70 for a time, but at 8 AM, the eastbound lanes were re-opened. The left westbound lane is still closed at this moment.

At this time, no identification of the driver has been made, but it has been confirmed by the Putnam County Sheriff’s Department that the driver was killed in the incident.

UPDATE: A second body was discovered in the cab of the tractor in this morning’s crash, confirmed by a Putnam County sheriff.