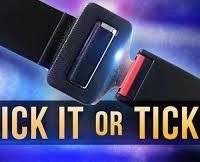 -As the unofficial start of summer, the Memorial Day holiday weekend is a busy time for Americans. Each year, the highways fill with families in vehicles, on their way to start their summer vacations. To help keep drivers and passengers stay safe, the Indiana State Police is reminding motorists to Click It or Ticket. Aimed at enforcing seat belt use to help keep families safe, the national seat belt campaign will take place May 21 through June 3, concurrent with the busy travel season.

Buckling up is something that should become second nature, said Indiana State Police Superintendent Doug Carter. Besides that. Buckling up is the law. The consequences of not buckling up is real and can include the loss of life. Often, this tragedy could have been prevented with the use of a seat belt. No excuses, buckle up!

According to the National Highway Traffic Safety Administration, nearly half (48%) of the passenger vehicle occupants killed in crashes in 2016 were unrestrained. At night from 6 p.m. to 5:59 a.m., that number soared to 56 percent of those killed. Thats why one focus of the Click It or Ticket campaign is nighttime enforcement. Participating law enforcement agencies will be taking a no-excuses approach to seat belt law enforcement, writing citations day and night. In Indiana, the maximum penalty for a seat belt violation is $25.00.