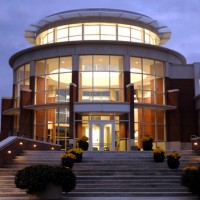 If you’ve ever thought about what it would sound like if Bach and Coltrane made music together, you’re in luck.

On Saturday April 7, the final Green Guest Artist  Concert of the season is featuring Grammy Nominated Imani Winds in a collaboration with the Harlem Quartet for a program titled “Passion for Bach and Coltrane” at 7:30 p.m. in Kresge Auditorium.

The Imani Winds, DePauw School of Music’s 2017-18 ensemble-in-residence, has carved out a distinct presence in the music world with its dynamic playing, culturally poignant programming, adventurous collaborations and inspirational outreach programs.

As can be deduced from the enticing title, “Passion for Bach and Coltrane” speaks to the musical mastery of the prolific Baroque composer J.S. Bach and jazz genius John Coltrane. Written by Imani member-composer Jeff Scott for wind quintet, string quartet, jazz trio and orator, the concert-length new work also draws inspiration from A.B. Spellman’s book of poems “Things I Must Have Known.”

Supported in part an award from the National Endowment for the Arts, this will be a unique performance to view seemingly polar opposites of the musical spectrum as equals.

Individual admission to Green Guest Artist Concerts is $20. Tickets for seniors, youth and all students are free. To obtain tickets online, visit music school website at music.depauw.edu. The venue’s box office is also open to assist patrons in person on Mondays, Wednesdays and Fridays, from noon to 4 p.m., and beginning 90 minutes before each ticketed performance.

Prior to the Green Concert, join the Chow Downtown movement and longtime community partner Almost Home at the restaurant’s collaborative dinner offered on April 7 from 4:30–7 p.m. The pre-concert menu will include their famous Saturday night prime rib special or cedar plank fresh salmon dinner, served with choice of potato, chef’s vegetables, rolls and pecan butter. For dinner reservations at Almost Home, persons may call 653-5788.