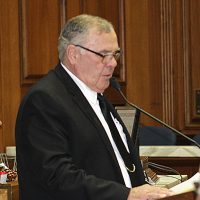 The House of Representatives voted yesterday in support of State Rep. Jim Baird’s (R-Greencastle) proposal that would ensure sailors who serve on the USS Indiana (SSN-789) are eligible for in-state tuition rates by making them honorary residents. The USS Indiana (SSN-789) is a United States Navy Virginia-class attack submarine that was christened in April. It will be commissioned into service later this year. The sailors would have 12 years from the beginning of his or her coursework to complete a degree at the in-state rate. Baird said this bill does not make these honorary citizens eligible for state student assistance. Baird’s bill now moves to the Senate for further consideration.