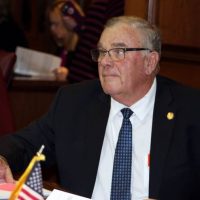 “We have a new namesake, a submarine was christened the USS Indiana in April and will be commissioned sometime this summer,” Baird said. “We would like to make the sailors aboard the USS Indiana honorary Hoosiers and in turn, make them eligible for in-state tuition.”

Under House Bill 1242, sailors would be eligible for the resident tuition rate once they have served on the submarine for 180 days. Those honorary residents then have 12 years from the beginning of their service on the USS Indiana to complete a degree at the in-state rate. Baird said this bill does not make these honorary citizens eligible for state student assistance.

Most fast attack submarines, like the USS Indiana, have a crew size of approximately 130 individuals who are from all over the United States.

The bill will now be heard on the House floor by all members. To learn more about this and other bills, visit iga.in.gov.