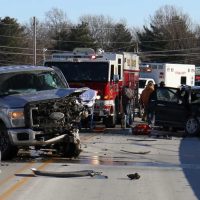 Three people were hospitalized following a Wednesday afternoon crash on US 231 near the entrance to the Putnam County Fairgrounds. Witnesses reported that a southbound Ford Explorer driven by Brandy Birge of Greencastle drifted over into the northbound lane. When this happened, Birge came into the path of a Ford F-Series Super Duty driven by Dennis Nemeth of Rockville. Birge made heavy impact with Nemeth’s vehicle, sending the SUV back into the southbound lane into the guardrail. Birge was flown to St. Vincent Hospital in Indianapolis. Nemeth’s wife was also airlifted to Methodist Hospital in Indianapolis. Nemeth himself was transported to Methodist by ambulance.