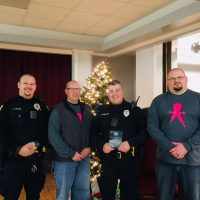 Greencastle Police Dept. recently named their officers of the year.  Officer Nick Eastham worked that showcased his hard work this year was one of a hit & run driver who fled the scene of a crash on the south side of the city in late summer. The vehicle recklessly drove through the city at a high rate of speed as it traveled north fleeing the scene, committing numerous traffic violations in well populated neighborhoods. Officer Eastham was able to intercept the suspect vehicle before another collision occurred or anyone else was hurt. The female suspect was arrested for hit & run, OWI, and possession of controlled substances, along with numerous other traffic violations.  Officer Brad Hiatt also was picked for Officer of the year. Officer Hiatt’s contributions this year have been tremendous, from technology needs to filling in whenever needed. He’s always prompt & squared away. Reserve Officer of the year award for the 2017 went to is Billy Wallace. Currently Officer Wallace has the highest amount of training hours.