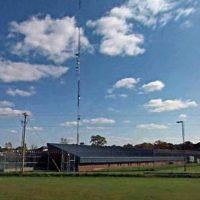 During the stop, “Zeke” gave a positive indication on the vehicle and during a search of the driver, approximately eight grams of suspected Marijuana was found in his pocket. He was taken into custody without incident and incarcerated in the Vermillion County Jail.

Adam C. Flowers, age 35, of Blanford, IN. was charged with Reckless Driving and Possession of Marijuana.