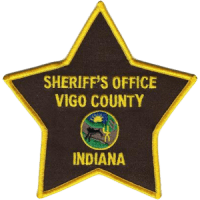 This morning just before 8:00, members of the Internet Crimes Against Children (ICAC) Task Force, executed a Vigo County search warrant at 2415 North 13 ½ Street in Terre Haute. Investigators were acting on a tip received from the National Center for Missing and Exploited Children about possible child pornography images possessed by a resident.

During the execution of the warrant and the subsequent search of the home and electronic devices, detectives discovered less than 10 child pornography images and less than two grams of methamphetamine.

The male resident, 49-year-old Leslie D. Helt, was arrested for six counts of Possession of Child Pornography and one count of Possession of Methamphetamine (all felonies). Helt was taken into custody without incident and incarcerated in the Vigo County Jail.

Pictures of task force at front and rear of home and ISP Detective Kevin Getz (red shirt) and suspect Helt (blue shirt, black shorts, and hat) as Helt is escorted to the mobile forensics vehicle.