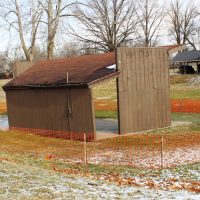 The new bandshell is scheduled to be rebuilt in the spring. It’s four corners are already marked out on the ground and it is planned to be up the hill and to the north of where it currently is. This project has received major donations from such groups as the Greencastle Civic League and the Putnam County Convention and Visitor Bureau and a $50,000 grant from the Indiana Office of Tourism Development and Indiana Office of Community and Rural Affairs. The decision to start the project in the spring was made because it is hoped that the bandshell will be finished by June 1, 2018. The new bandshell is modeled after a bandshell in Barrington, Chicago. In order to add some originality though, limestone pilllars half way up each of the four corner supports was added, the rear wall is also limestone, and the roof is extended over the limestone to help keep it from the rain. It is hoped that the bandshell can have a more open look.