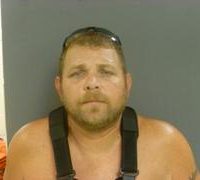 Indiana Conservation Officers arrested Andrew Crouch, 41, of Rockville, on an outstanding warrant from Parke County for multiple charges due to a recent ORV crash.

The arrest warrant issued today from Parke County for Crouch included charges of Causing Death when Operating a Motor Vehicle while Intoxicated, a Level 5 Felony, and Driving while Suspended with Prior Convictions, a Class A Misdemeanor.  Indiana Conservation Officers arrested Crouch without incident at a residence in Hillsdale.

The investigation began when an atv was crashed in the early morning on July 9, 2017 on Marshall Road in Rockville.  Crouch was transported from the crash to Union Hospital for multiple injuries, and Tammie Russell was pronounced dead at the scene.  Autopsy reports later determined that Ms. Russell was killed from blunt force trauma to the chest.