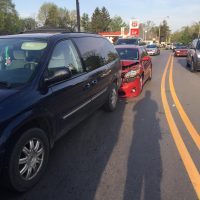 On April 20th the Danville Metropolitan Police Department responded to a three vehicle accident at the intersection of Cross and Main Street. According to reports a van was rear-ended by a red sedan while the van was stopped at the intersection. The accident caused traffic to be backed up along US Hwy 36 for a couple of hours. There were no reports of injuries.