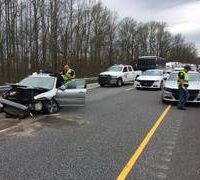 On April 10 the Indiana State Police Region V Dispatch Center notified all Putnamville troopers that an armed robbery suspect from a Paris, Illinois pharmacy was traveling eastbound on Interstate 70 from the state line area. The suspect was a black male driving a silver 2012 Chevrolet Malibu with Indiana registration. At 2:46, two Indiana State Police troopers were working the construction zone near the nine mile marker and spotted the eastbound suspect vehicle. The troopers attempted a traffic stop, but the suspect fled eastbound on I-70. While traveling recklessly through the construction zone, the suspect very nearly struck three construction men working near the center of the roadway, causing the three to quickly divert from their work area or risk being struck. Troopers continued to pursue at speeds reaching a maximum of 110 miles-per-hour with other ISP troopers and Clay County Sheriff’s deputies deploying tire deflation devices in the eastbound lanes both west and east of State Road 59. The suspect avoided the first set west of SR 59 and attempted to avoid the second set east of SR 59 (Exit 23), and struck the inner guardrail. The suspect then veered into a white 2014 Ford pickup, driven by 47-year-old Shawn B. Riley of Moberly, Missouri forcing the Riley vehicle off the roadway. Following the collisions, the suspect vehicle became disabled in the roadway and the suspect was quickly taken into custody by ISP Sergeant Joe Rutledge and Trooper Brent Robinson. During a search of the suspect vehicle, troopers allegedly located clothing and pharmaceutical evidence related to the Paris, Illinois pharmacy robbery, as well as approximately 20 grams of suspected marijuana. The suspect, 18-year old Shawn Michael Caballero of Indianapolis, IN. was incarcerated in the Vigo County Jail on preliminary charges of one count of Dealing Controlled Substance greater than 28 grams; four counts of Criminal Recklessness with a Vehicle; One count of Resisting Law Enforcement with a Vehicle; Possession of Marijuana with Prior Arrest; and Operating While Intoxicated-Refusal.