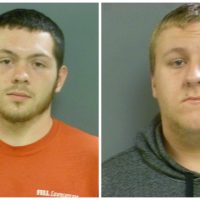 On March 1st at approximately 8:30pm, Montezuma Police Department and Parke County Sheriff’s Deputies responded to a shots fired complaint in the area of CR 40 North and Arabia Road. Officers located shell casings in the area where the shooting was reported. After further investigation at several locations, it was determined that John Smith, age 19 of Montezuma, had fired a handgun from a vehicle. John was arrested and formally charged with Criminal Recklessness with a deadly weapon, possession of a firearm without a permit, and intimidation. Smith was taken to the Parke County Jail on a $10,000 cash only bond. During this investigation it was learned that the firearm belonged to Jimmy Griffin Jr., age 18 of Rosedale. Griffin Jr. was arrested and charged with possession of a firearm without a permit. He was transported to the Parke County Jail and given a $5,000 bond with 10% acceptable.