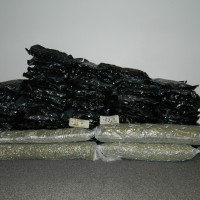 Friday morning at approximately 8:45am, an Indiana State Police Trooper performed a traffic stop near mile marker 41 of eastbound Interstate 70, due to a Toyota SUV performing unsafe lane movement and following too close. The Trooper identified indicators of possible criminal activity, which led to a search of the subject’s vehicle. Approximately 100 pounds of high grade Marijuana was located within the vehicle cargo hold. The substance was separated into 84 individual packages, ranging from one to five pounds, expected to hold an estimated street value of $400k. An additional $6k American cash was also located inside the vehicle. Driver, Sonora Wong, 24, of Garden Grove, California was reportedly traveling from California to Pittsburgh, Pennsylvania. She is currently being held in Putnam County Jail on Level 5 Felony Dealing Marijuana over 10lbs, and Level 6 Felony Possession of Marijuana.