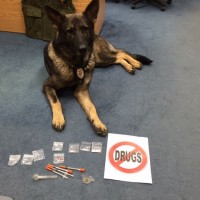 The new GPD K9 Officer Cain, assisted in his first drug arrest on Saturday, October 2, 2016. On Saturday at approx. 2 p.m. Officer Kyle Lee stopped a black SUV in the 600 block of Bloomington Street for failure to use their turn signal. During the course of the traffic stop it was determined that the passenger, Chad Gore age 31 of Indianapolis, was in possession methamphetamine. In Gore’s possession were four syringes, one of which was “loaded” with a clear substance. Also removed from Gore’s left front pocket was a Newport cigarette pack that contained a small “bud” of a green substance that had the appearance & smell of marijuana, as well as several empty plastic baggies along with four other plastic baggies containing a white crystal-like substance believed to be methamphetamine. Gore was booked into the Putnam County Jail pending review of charges by the Putnam County Prosecutors Office.