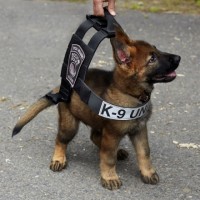 Less than a year ago the Parke County Sheriff’s Office employed K9 Gemma as the beginning of their K9 unit to the department, and already she’s being hailed as a hero, while having the K9 backup is proving to be a potential livesaver, not only for Parke County deputies, but also for civilians. Last Sunday night, a suicidal male called Parke County dispatch, warning he was armed and was aiming for the police to kill him. When deputies arrived on scene, the male had a large knife and fled on foot into a cornfield. K9 Gemma was then dispatched after the armed male, who quickly surrendered, later saying if it hadn’t been for the K9 unit, he would have rushed the officers attempting to force them in shooting him. K9 Gemma’s Handler, Cory Hutchins, says the long training hours are paying off, and having Deputy Gemma along side him is like having eyes in the back of his head. Deputy Gemma is a two year-old Belgian Malinois. Local dog trainer, Jack Shannon, donated Gemma to the department after learning they were searching for a K9 Unit. Without donations, a K9 deputy such as Gemma would cost the sheriff’s office approximately $12,000.