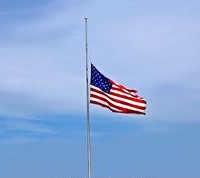 In accordance with a presidential proclamation issued this afternoon, July 15th, Governor Mike Pence has directed flags at state facilities statewide be flown at half-staff beginning immediately to honor the victims of last night’s third major terror attack within the last nineteen months, leaving 84 dead and 202 injured during a Bastille Day celebration in Nice, France. Flags should be flown at half-staff immediately until at least sunset on Tuesday, July 19th. Governor Pence released a statement shortly after news broke of the attack in Nice, France, which is available at WREBfm.com, and has asked businesses and residents to lower their flags to half-staff, as well, to honor and mourn with the people of France.

The Governor released the following statement after news of the attack broke last night:

“Our hearts go out to the fallen and their families in today’s terrorist attack in France. This attack is a horrific reminder of the threat facing Western civilization. This must end. As we mourn with the people of France, we must resolve to bring to justice all those responsible and defeat this enemy of civilization at its source.”