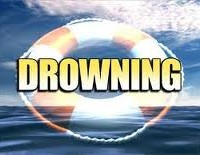 Indiana Conservation Officers are investigating the death of Rosendo Colon-Claudio (20) of Indianapolis, who was pronounced dead today after he was swimming and did not resurface at the beach inside Lieber State Recreation Area. Witnesses say the victim expressed intent to see how far he could swim into the lake. As he was returning to shore,  he appeared to grow tired, and disappeared under the water a few yards from re-entering the boundary to the swimming area. The beach has a designated swimming area marked with a floating rope boundary. Indiana Conservation Officers were notified of the incident at 2:22 p.m. after a friend of Colon-Claudio dialed 911. Indiana Conservation Divers responded to the scene and recovered the victim at 3:02 p.m. CPR was administered on site. The Putnam County Coroner declared Colon-Claudio dead at the scene. Indiana Conservation Officers are still conducting an investigation into the incident but no foul play is suspected at this time. An autopsy is scheduled for 1:00 p.m. on July 14, 2016 at Terre Haute Regional Hospital.