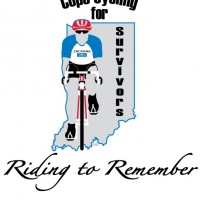 15th Annual Cops Cycling for Survivors is set to start Monday as bicycles ride across Indiana supporting law enforcement survivors, as well as honoring fallen police officers and their families. For the first time in 30 years, 2015 lost no officers to line of duty death in Indiana. A departure ceremony is to be held at 8:30AM downtown Indianapolis in front of the Indiana State Museum with keynote comments by survivors Carolyn Dudley and Jennifer Martin-Luskey. For the second year in a row, Governor Mike Pence and First Lady Karen Pence will join the cyclists to ride for part of the first day following the departure ceremony. The cyclists’ journey will last 13 days and cover nearly 1,000 miles bicycling the perimeter of Indiana. Cops Cycling for Survivors Foundation, Inc. annual bicycle ride raises awareness of the sacrifices made by Hoosier law enforcement families across Indiana, as well as raising funds to aid surviving family members and co-workers of officers killed in the line-of-duty, and to preserve the memories of officers killed in the line-of-duty. In addition to foundations, scholarships and camps started in memory of fallen officers, raised funds have previously been donated to National Concerns of Police Survivors, the Indiana Chapter of Concerns of Police Survivors and Project Blue Light at the Indiana Law Enforcement Academy. For more in-depth information, itinerary, and useful links, visit this story at WREBfm.com.

The closing ceremony will begin at 2PM on Saturday afternoon on July 23rd at Crown Hill Cemetery in the Heroes of Public Safety Section. All are welcome to attend as Indianapolis Colts long snapper Matt Overton will provide the closing message. To track the ride’s progress and activities, please like and follow them on the Cops Cycling for Survivors Foundation Facebook page (Cops Cycling for Survivors). For more information about the organization, donations, Cops Cycling swag, as well as specific locations of meals and overnights for this year’s ride, visit this link.

The general route of the ride will be as follows: