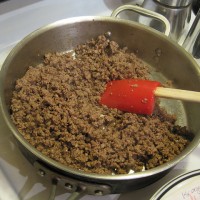 Defendant Pattie Stanifer, 50, of Cloverdale, appeared without legal counsel in Putnam Circuit Court this week for her Initial Hearing, to face charges related to what is being referred to as a  “frying pan-to-the-noggin scenario” with her husband, Michael Stanifer, Sunday evening, July 3rd. Mrs. Stanifer told Senior Judge T. Edward Page that Mr. Stanifer “kept egging [her] on to hit him in the head with the frying pan, so [she] did it.” Though Mrs. Stanifer tried to reason she had just cause as her husband had been “rubbing hamburger in [her] hair and trying to shove it down [her] throat.” After reportedly fleeing upon arrival of police to their Cloverdale residence, Pattie Stanifer was arrested on two charges of Resisting Law Enforcement, both a Class A Misdemeanor with a potential sentence up to one year, and a Level 6 Felony with a potential sentence of up to 30 months. She was also charged with Domestic Battery, a Class A Misdemeanor, and Operating a Motor Vehicle While Intoxicated, a Class C Misdemeanor, with a potential sentence of up to 60 days, in addition to having her driver’s license automatically suspended for a year due to refusing a breathalyzer. Judge Page, sitting in for Judge Matt Headley informed Mrs. Stanifer that she could face a sentence of more than 3.5 years, as well as fines of nearly $15,500 if convicted on all charges. No word on any injuries to Mr. Stanifer, but Judge Page has issued a no-contact order on his behalf. A Pretrial Conference date was set for August 25.