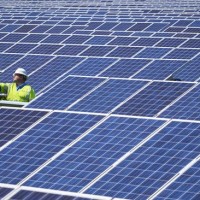 More clean, renewable solar energy will soon flow to Duke Energy Indiana customers with the construction of a new 17-megawatt solar power plant at Naval Support Activity Crane, also known as the Crane naval station, located about 40 miles southwest of Bloomington, Indiana. The Indiana Utility Regulatory Commission has approved a settlement agreement between the company and the Indiana Office of Utility Consumer Counselor to build the solar plant, which will sit on roughly 145 acres in the southeast portion of the naval base. It will be the second-largest solar power plant in the state, and the largest on the Duke Energy Indiana system. Construction activity will begin this month, with installation of approximately 76,000 solar panels. The power plant is expected to start sending solar energy to the grid by early 2017.