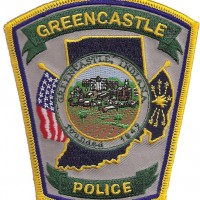 Yesterday morning Officer Kyle Lee initiated a traffic stop in the parking lot of the Colonial Arms Apartments located on the corner of Illinois & Hanna St in Greencastle. The driver, later identified as Billy Jones of Greencastle, Indiana, exited the truck and fled on foot southbound at which time Officer Lee initiated a foot pursuit and gave chase.
The foot pursuit came to an end near the Ridpath Elementary school where Officer Lee was able to place Jones under arrest. Jones was then transported back to the scene of the traffic stop; during the course of the investigation a black zip-up pouch was located. Located inside the pouch was approximately 7 grams of a white crystal-like substance believed to be methamphetamine as well as multiple articles of paraphernalia commonly used to ingest methamphetamine including hypodermic syringes & glass pipes. Billy Jones was then transported to the Putnam County Jail and booked in on the charges of operating while suspended prior, resisting law enforcement, possession of methamphetamine, possession of paraphernalia, and driving while suspended prior.