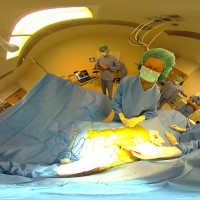 On Tuesday April 12, 2016 a rural Indiana surgical team at Putnam County Hospital performed the world’s first live virtual reality (VR) transcontinental hernia surgery with Dr. Hugh McGregor, located in Brisbane Australia, as the virtual assistant.  Dr. Paul Szotek, who did the first surgery in Indiana using Google Glass technology in February 2014, broadcast the hernia surgery live using a special 360 degree camera that allows viewers to experience the surgery in an immersive virtual 3D environment.  “The beauty of this is that the cost is minimal, only requiring a smart phone and a viewing device, like Google Cardboard, that is often under $20” stated Dr. Szotek.

Simultaneously, the surgical team broadcast the hernia surgery live using Google Glass and the ExpertEye telementoring platform from AMA XPERTEYE Inc. (www.ama.bzh), a French based technology company.  Using the combined Google Glass and VR technology, Dr. McGregor was virtually transported 8, 947 miles from Brisbane, Australia to the operating room in Greencastle, IN as the virtual assistant.  Dr. McGregor viewed the case on his VR headset, participated in the discussion of the case, and telestrated images that were sent to Dr. Szotek on a computer monitor in the OR.  “This type of technology will open the door for isolated remote surgeons to invite experts into their operating rooms and provide specialist opinions and mentoring that might not otherwise be afforded in such locations”, Dr. Szotek said.   In addition, Dr. Szotek feels that the future of surgical training at all levels will be influenced by virtual reality, augmented reality, and telementoring.  The utilization of these emerging wearable technologies