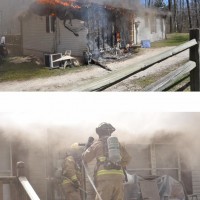 Owen Valley Fire Department responded to a reported residential structure fire on Thursday April, 14th. When crews arrived on scene to work the fire they discovered heavy smoke coming from the residence. Fire crews were able to control the fire shortly after arriving and also rescued the family dog that was trapped in the home. OCSD, Patricksburg Fire Department also assisted at the scene. No injuries were reported however the residence was written off as a total loss.