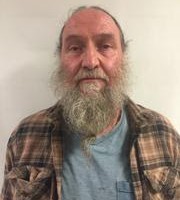 During the ISP investigation, Detective Don Anglin was able to determine that a disturbance over scaffolding on March 25, 2016, resulted in Robert E. Young allegedly discharging a 9 millimeter handgun in the direction of a 2002 Chevrolet pickup driven by the victim, Jeffrey DeWayne Perkins, age 59, of Greencastle, IN. The round traveled through the rear window striking Perkins in the head. Perkins was airlifted to St. Vincent’s Hospital in Indianapolis in serious condition, where he remains today undergoing treatment. Perkins was allegedly attempting to leave the residence when the event occurred.