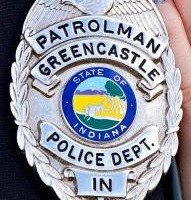 On Monday, April 4th, 2016 at approximately 7:07 PM, Officer Billy Wallace and GPD Officer Brad Hiatt initiated an investigation into two pedestrians who were impeding traffic on Indianapolis Road in front of CVS Pharmacy.  One of the subjects, who was identified as Elijah D. Isenhower age 25 of Danville, Indiana, was found to be in illegal possession of two syringes and was taken to the Putnam County Jail.  The other subject, who was later identified as Anthony M. Leonard age 20 of Greencastle, originally gave a false/fictitious name when asked about his identity.  He claimed to be Christopher Owens from Ohio.  However, when GPD Captain Charles Inman responded to the scene, Inman recognized him as being Anthony Leonard from previous contacts such as an incident at McClure’s Gas Station where Leonard was wearing a gas mask pacing back an forth in front of McClure’s.  Prior to Leonard being correctly identified, GPD officers attempted to take Leonard into custody to get him correctly identified.  When Leonard physically resisted, refusing to allow officers to place him in handcuffs and refusing to follow officers’ orders.  Leonard then fled on foot from the CVS parking lot, running south past Avenue B and Avenue C, being pursued by Officers Hiatt and Wallace.  Upon catching up to him, Officer Wallace deployed his Taser, which subdued Leonard, allowing Officer Hiatt to detain him.  Anthony Leonard was taken into custody by Officer Hiatt and booked in at the Putnam County Jail for disorderly conduct, false informing, and resisting law enforcement. Charges are pending review by the Putnam County Prosecutors Office.