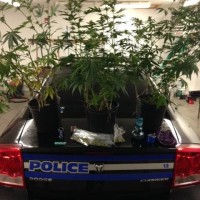 On April 1st at approximately 8:30pm, Greencastle Police Officer Rhine and Crosby conducted a narcotics investigation at the Greenwood Apartments. Tenants of the apartment complex contacted law enforcement to report the odor of marijuana coming from one of the apartments. During the investigation the officers discovered a marijuana grow in a hall closet. The 3 marijuana plants that were found in the closet were recovered along with, bags of marijuana, and several items of paraphernalia. Two individuals were cited for Minor Consumption of Alcohol and two others were taken to the Putnam County Jail for Possession of marijuana, paraphernalia and probation violation. Information has been forwarded to the prosecutor’s office.