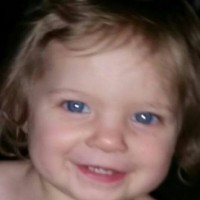 The death of one-year-old Shaylyn Ammerman has been ruled a homicide after the coroner, forensic pathologist Dr. Donna Stewart, performed the autopsy in Louisville, Kentucky Friday, and determined the toddler died from asphyxiation. Shaylyn disappeared from her home sometime Tuesday night, and was reported missing Wednesday morning. An Amber Alert had not been issued because investigators had neither information about a suspect or suspect vehicle, which is required. But over 60 members of law enforcement were involved in the search for Shaylyn, including Indiana State Police, Spencer Police, Owen County Sheriff’s Office, and others.
At least 10 persons of interest have been interviewed. Indiana State Police Sgt. Curt Durnil said “information from witnesses and persons of interest led [searchers] to the spot” in a remote area of private property, where Indiana Creek meets the White River, in a wooded area northeast of Gosport, where young Shaylan’s body was found, with the help of cadaver dogs, just after 6PM Thursday night. Kyle Parker, 22, of Spencer, has been arrested in connection with the investigation, and facing preliminary charges of two counts of obstruction of justice, one count of failure to report a dead body, and one count of improper disposal of a corpse. Parker has not made any statements since being taken into custody, and his detailed role in the case is still unclear. Reportedly the home showed no signs of break in, however, the victim’s grandmother has remarked that the home was unlocked. Several persons of interest have undergone polygraph examinations. The investigation is ongoing, and it remains to be seen if more people will face charges.
If you have any pertinent information you are urged to contact Indiana State Police Bloomington Post or Sgt. Curt Durnil at 812-332-4411.