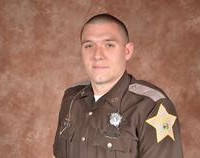 On March 20th 27 year old Deputy Carl A. Koontz, an almost three year veteran of the Howard County Sheriff Department has died as a result of gunshot injuries sustained during a warrant service.

At approximately 12:30am March 20th, Koontz, along with Howard County Sheriff Sergeant Jordan J. Buckley and officers from the Kokomo Police Department were attempting to serve a search warrant at 380 Chandler Street in Russiaville, southwest of Kokomo. Officers entered the residence after knocking and announcing their presence with no answer. The officers were confronted with gunfire and they retaliated. During the exchange of gunfire Koontz and 35 year old Buckley were wounded.

Deputies secured the area around the residence with assistance from Howard County SWAT, Kokomo Police SWAT and ISP SWAT. Attempts to contact the occupant of the residence began at 2:30am with no response. These attempts continued for 2 hours. SWAT personnel were able to confirm that an individual was deceased inside of the residence which was later identified as the suspect. As of today Sergeant Buckley is in good condition while funeral arrangements were made for Carl Koontz.