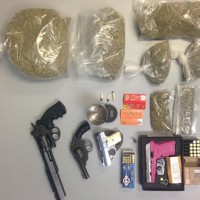 Thursday, February 18th, Greencastle Fire Department was dispatched to Frazier Street at 11pm for a Carbon Monoxide investigation, with the assistance of Greencastle Police Captain Charles Inman and Officer Matt Huffman. The area proved clear of Carbon Monoxide, however, during the safety check, many concerning items were visible, such as a large quantity of ‘Spice’ (which is a synthetic cannabis substance), also pills, scales, an open carton of ammo, and also a handgun holster. With further investigation of the residence, approximately 1.7 pounds of Spice was revealed, with a street value of over $3500, as well as multiple handguns.The investigation is still ongoing. Reports have been sent to the Putnam County Prosecutor for review on the following charges: Jonathan Hankins, 37, faces charges of Dealing in a Synthetic Cannabinoid, Possession of a Synthetic Cannabinoid, Reckless Possession of Paraphernalia, and Unlawful Possession of Firearm by Serious Violent Felon. And Marvin Baker, 57, faces charges of Unlawful Possession of Firearm by Serious Violent Felon. The Greencastle Police Department would like to thank Capt. Charles Inman, Officer Matt Huffman, 911 Operators Debra Simmons and Brian Ervin, Greencastle Fire Department, and Putnam County Prosecutors Office for their hard work on this investigation. The interagency ability to work in partnership with each other resulted in taking guns and drugs off the streets of Greencastle.